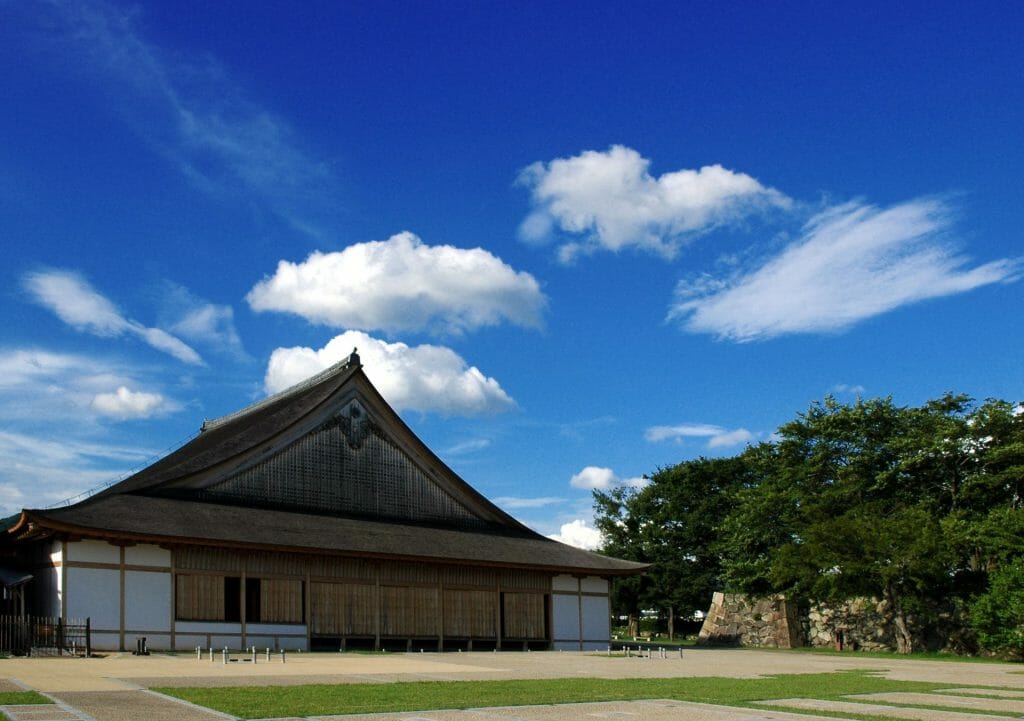 For your safety, please refrain from looking at mobile phones on a moving bicycle. Come to a stop before searching for information.
Please follow traffic laws, keeping safety in mind.

This Samurai residence was built sometime after 1830. Owned by the Anma family, it has been passed down from generation to generation.
A residence of the Anma family, who was a Kachi (a lower class of Samurai) in 1838, this house was built on a plot of land 13m by 15m. It is what is called a Magari-ya or ‘bent house’ with a thatched roof called Kayabuki constructed in the Irimoya style. The ancient architecture has been so well preserved, on March 23, 1994 it became Sasayama City’s Designated Cultural Property.
For more info:

❷The Historical Area of the Aoyama Clan and Dekansho Museum

The Aoyama Historical Village consists of a central structure called ‘Kei En Sha’ surrounded by three ‘do-zou’ (storage buildings) and a ‘nagaya-mon’ (gate) which was also used as a residence for servants or guards.
The buildings were dismantled, relocated and reconstructed by the Aoyama family following the Hanseki Hokan*. As their second house, it houses their feudal clan’s governing documents, records, personal belongings and heirlooms, and also the Shin Toku Do’s (Sasayama school’s) book collection.
The property has been open to the public since 1987.
In 1998, the Aoyama-kai Foundation, which had been managing the Historical Museum, donated all their assets to Sasayama City. Since then, the city hall maintains the collection as a public archive and it is also used for study and research.
* Hanseki Hokan is a historical event that happened 150 years ago. The land and people that used to belong to the feudal lord were returned to the Emperor.
For more info:

The Historical Area of the Aoyama Clan and Dekansho Museum

The Oshoin was built in 1609, the same year Sasayama castle was being built. Tragically, on the night of January 6, 1944 it caught on fire and burned to the ground. However, through the passions and donations of Sasayama citizens, the Oshoin was rebuilt in March of the year 2000.
For more info:

The main building of the Sasayama Historical Art Museum was originally built as Sasayama’s district court in 1891, and was used as such until June of 1981. As the oldest wooden courthouse in Japan, the city decided that in order to preserve this important historical structure it would be renovated, leaving the exterior and courtroom in its original state, to be used as an art museum.
For more info:

The Noh stage is located within the property of Kasuga shrine. Known as a great fan of Noh plays, Tadanaga Aoyama (the 13th feudal lord of Sasayama) had it built in 1861.
Uniquely built according to the lord’s tastes, big Tambayaki vessels were placed beneath the stage floor to enhance the sound of the actors’ feet stomping on the floorboards. It is said to be the most admired Noh stage west of Hakone.
Nationally designated Important Cultural Properties. 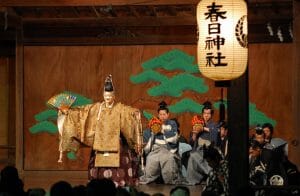