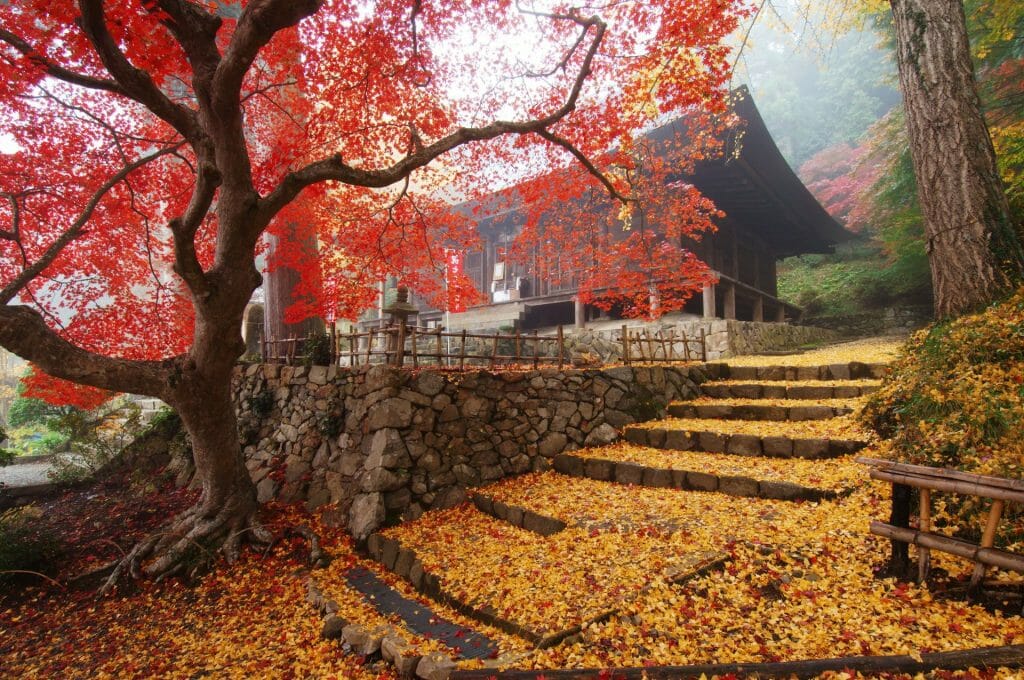 Where to go to enjoy the breathtaking beauty of autumn leaves?

Looking at the beautifully colored leaves of the trees is a pleasure unique to autumn. Please come and enjoy the tasteful autumn colors of Tambasasayama along with the Tamba fog.

To Make the Autumn Leaves Beautiful, they need:

・ The large temperature difference between day and night in September and October.
・ The clear air during the day and the leaves’ exposure to sufficient sunlight.
・ The moderate humidity in the clean atmosphere so that the leaves do not dry.
(Tamba morning mist helps to provide it)

Tambasasayama can provide all the conditions above, so the beautiful autumn color spreads not only the mountain and valleys but throughout the city as a colorful landscape.

You can relax and enjoy the splendid color of Tambasasayama, away from the hustle and bustle of the city.

Among the rich nature of Tambasasayama, the three temples of Kozoji, Bunpoji, and Daikokuji have long been famous for autumn leaves.

How about taking a relaxing trip to those the three temples?

If you go around these three temples and get a stamp at each temple before November 30th, you will receive a limited-time-only “Momiji Sanzan Shuin” at the third temple. 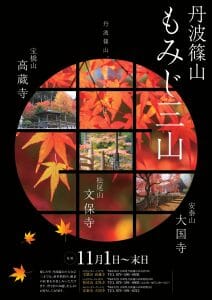 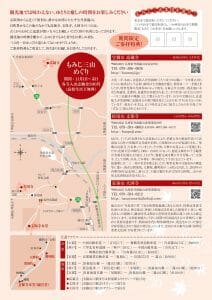 It is known as the Flower Temple because there are many flowers throughout the four seasons in the temple property, from the mountain gate to the main hall.  Cherry blossoms in spring, hydrangea in summer, colored leaves in autumn, and camellia in winter. Since 2013, many people have visited as “Tambasasayama Momiji Sanzan(3 main spots)” along with Bunpoji Temple and Daikokuji Temple in autumn.

An ancient temple that was founded by Hodo Sennin in the second year of Taika (646). It was burnt down by Akechi Mitsuhide’s attack on Tamba, but was rebuilt at the current location in the first year of Bunroku (1592).

There are Japanese maple, zelkova, African fu, etc. in the precincts, and the scenery of the red valley with the green mountains on the background is unique to Kozoji. 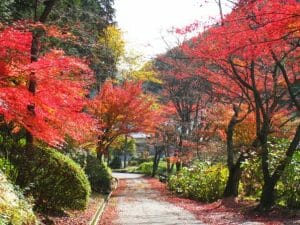 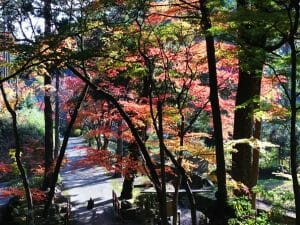 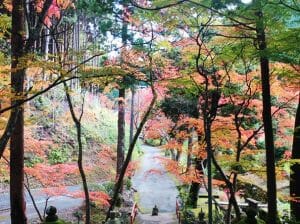 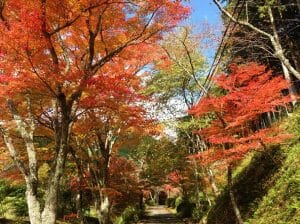 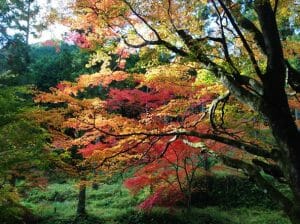 Bunpoji Temple was opened by Hodo Sennin in the first year of Taika (645). He enshrined the Holy Kanzeon Bosatsu(Buddhist deity of mercy) which he made himself as the principal image. The temple used to be  called Choryuji Temple.

At the end of the Warring States period during the Tensho era (1573-1592), when Akechi Mitsuhide attacked Tamba the whole temple was burned to ashes, but was reconstructed in the mid Edo period.

There is a large ginkgo tree in the precincts, and a series of Japanese maples are planted along the Bunpoji River that connects the three temple buildings. The maple leaves softly cover the powerful masonry. The alluvial fan created by the Bunpoji River at the back of Ajima Oku has an evergreen tea plantation, and the scenery of autumn leaves and dark green tea plantations is unique to Bunpoji Temple.

Daikokuji Temple is in the Ajima Oku area which is known as the “Tamba Tea Village”. The main hall, which is a mix of the Tang dynasty style and the Japanese style, is architecturally unusual and is designated as a national important cultural property.

A large number of Japanese maples are planted along the valley in the precincts. The leaves of ginkgo trees becomes yellow first, then the Japanese maple leaves turn red on the yellow carpet of the ginkgo leaves. The scenery is just amazing. The contrast with the rooftile of the main hall and the reflection on the Benten Pond is also unique to Daikokuji.

It’s a popular spot for cosplayers, so you might even come across a photo session.

Almost the entire hill at the eastern end of Sasayama Castle is Ojiyama Park.  Known as a famous spot for cherry blossoms and autumn leaves, it is also a place with a superb view overlooking the Sasayama Castle townscape. In the park, there is also Ojiyama Makekirai Inari Shrine, which is widely worshiped as a deity of success. Autumn leaves have been seen throughout the valley called the Momiji Dani (Maple Valley) for a long time. The colored valley with Japanese oak and zelkova is a scenery suitable for a famous place for autumn leaves. 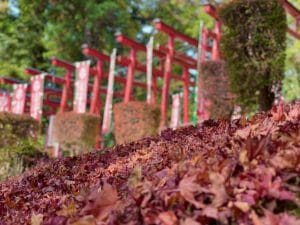 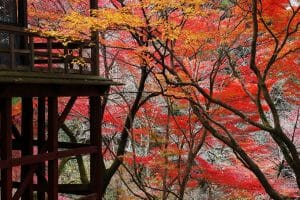 Sue no Sato and The Museum of Ceramic Art, Hyogo (Tachikui)

The Tachikui area is surrounded by deciduous broad-leaved forests with few planted forests, and in autumn it becomes a fascinating colored view along with the surrounding mountain range. The contrasting landscape with the congested village houses at the foot of the mountain is unique to Tamba Yaki no Sato, one of the six ancient kilns in Japan.

The splendid row of deciduous trees consisting of zelkova and ginkgo at the foot of the mountain is in harmony with the autumn colored Satoyama* behind. (*Satoyama is an undeveloped woodland area near a village)

Enjoy the amazing autumn view of the colored mountains and the pottery village from the outdoor wood terrace of the Museum of Ceramic Art, Hyogo (wood terrace is free of charge).

A recreational accommodation facility built by the Matsushita Electric Industrial Labor Union. It is open to the public as a place to disseminate initiatives such as protecting the natural environment.

In recent years, they have been working on the restoration and regeneration of satoyama, and in 2017, they were certified as a “UN Decade on Biodiversity Collaboration Project”.

In the park, many yellow-leaved trees such as katsura and ginkgo, and many trees for autumn leaves such as Japanese maple and metasequoia are planted. You can enjoy the natural landscape of the four seasons along with the deciduous broad-leaved forests such as zelkova, oak, Japanese maple, and goby in the satoyama.

Established in 2002 as Hyogo Prefectural Hometown Forest Park. There is a walking path in the park, and you can enjoy the scenery of each season.

There are also plenty of outdoor activities led by the local volunteer staff.

In autumn, the entire valley become like a colorful tapestry, centering on a large ginkgo tree near the watermill, and the contrast with the colored satoyama viewed from the central facility is unique to Sasayama no Mori Park.

An ancient temple located at the foot of the Makigamine, where the Ryuzoji River the source of the Muko River flows down. It is one of the Taki Mountains.

Ryuzoji Temple has been a guardian of the Tendai sect since the Heian period,  received a red stamp from Hideyoshi Toyotomi. The forest was donated by the second Tokugawa shogun, and the feudal lord of Sasayama was quite devoted to this temple.

The precincts along the Ryuzoji River are known as scenic spots for the four seasons, and you can enjoy many wild plants and flowers throughout the year. Particularly the mitsumata community and wild cherry tree along the mountain road in early spring, and the Japanese maple along the mountain stream  in autumn are famous, and it is written as “a famous place for maple” in the ancient map of the Edo period. 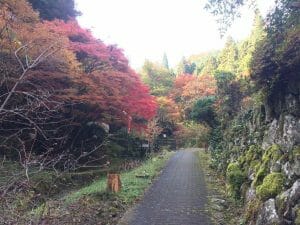 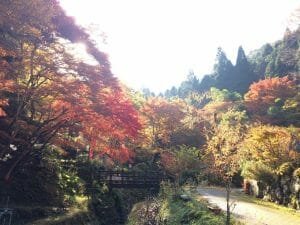 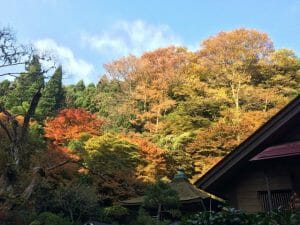 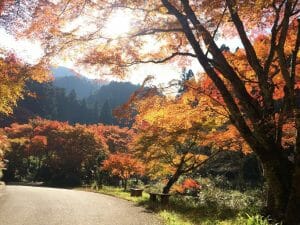 There are many other attractions!

In addition to the places introduced, Tambasasayama city is full of beautiful autumn leave spots ♪