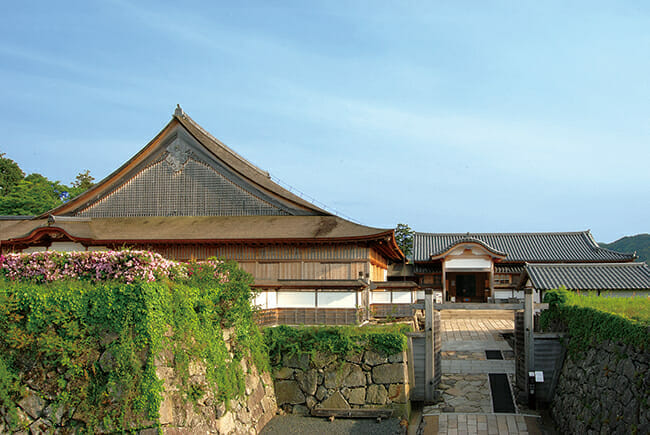 The Oshoin Palace was built at the same time as the Sasayama Castle in 1609. Sadly, it was burnt down on January 6, 1944, but was rebuilt in March 2000 through the generous donations and enthusiastic wishes of the citizens of Tambasasayama.

Features of the Oshoin Palace

The Oshoin Palace is a very large wooden building. Among similar existing buildings, it is comparable to the Ninomaru Goten Tozamurai in Nijo Castle, Kyoto. The palace of Nijo Castle is the highest class of building and was where the Shogun stayed when he traveled to Kyoto. That means that the Oshoin Palace has an exceptional scale and grandeur in a traditional architectural style considering that it was just an administrative palace for a feudal lord.

Scale of the Oshoin Palace

In restoring the Oshoin Palace, a comprehensive academic survey of old drawings, old photographs, and excavations. was carried out. Based on the results, designing and construction were carried out and completed in March 2000. The restored building is a one-story building with the north gable side being the front of the building. It has a floor area of 739.33 square meters, a building height of 12.88 meters, and a gabled roof with wooden shingles.

About the raised floor area

The raised floor area is the most prestigious place in the palace and measures 6.9 m in width. There is a fixed writing table in the outer corner of an exquisitely styled alcove on the left, a styled built-in bookshelf on the right, and an ornamental formal entry doorway. It is believed that the style for decorating these tatami rooms was established around the time of Keicho (1596-1615), when the Oshoin Palace was built. In order to reproduce the atmosphere of the past, paintings by the Kano school painters in the early Edo period on folding screens are used as background pieces. 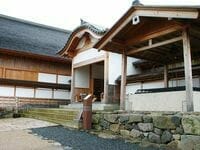 A panel display of events in the Sasayama domain during the Edo period is provided.

A video production called “Sasayama Castle Story” is shown here. The story introduces the historical background and construction of Sasayama Castle. Japanese language only. (Aired every 15 minutes from 9:30 a.m.  English subtitle version is available upon request in advance)

Guides are available to give tours. Reservations are required. Japanese language only. (Note: 2021 During the current Covid situation tour guidance is unavailable.)