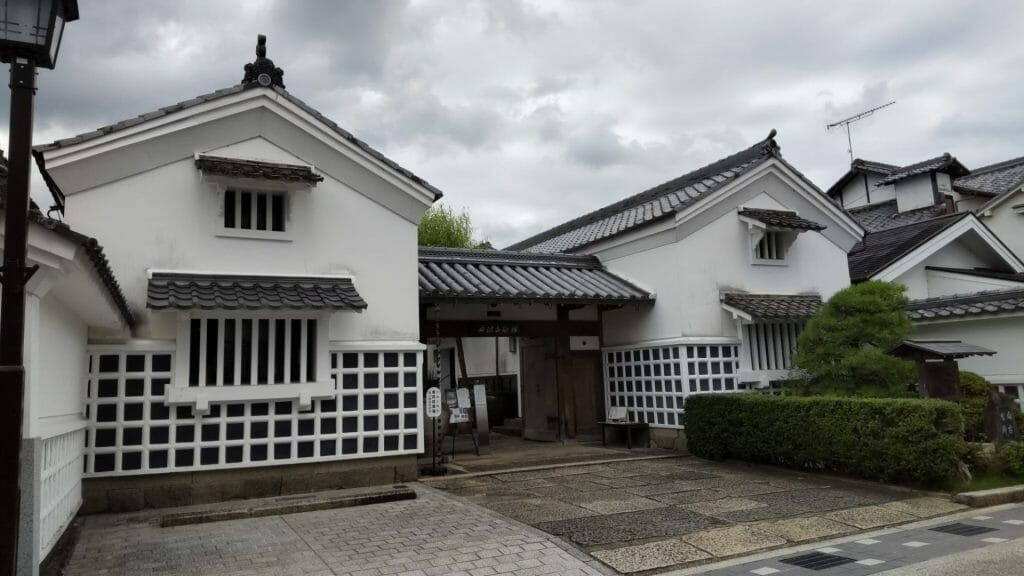 The Kawaramachi Tsumairi Merchant Housing District in Tamba Sasayama was designated as an Important Preservation District of Historic Buildings in December 2004. “Tsumairi” is the name of the architectural style of the area.

The district was first built up in 1620 as the main street of Tamba Sasayama. The current main street is located closer to the old castle site, which is one reason that many of the old buildings in the Kawaramachi district remain much as they were in times past. Another reason that this district escaped ‘modernization’ is that they won the fight to prevent the train line from being build through the area, which is also the reason the train station is now so far from the center of Tamba Sasayama.

The buildings showed above are the Old Tamba Pottery Museum, which was previously the ‘vaults’ of the bank directly across the street. In those days, rice was the main form of currency, so that’s what these buildings contained. If you get to Sasayama, you’ll want to visit this museum, along with its sister museum down the street of masks and other objects used in Noh plays. 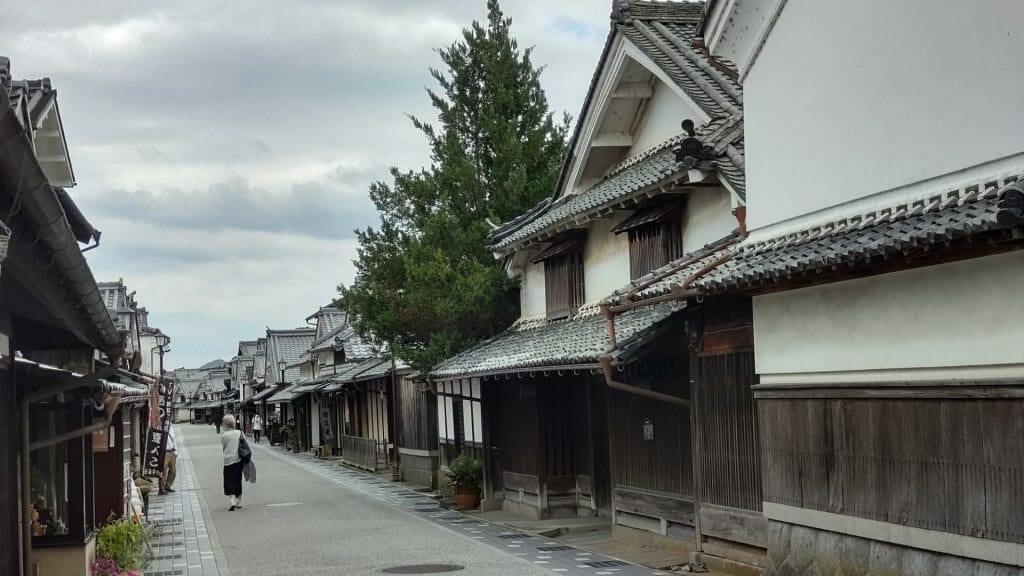 View Down the Kawaramachi Street

The above photograph shows part of the long main street. The name of the district says “Merchant Housing,” but the front rooms of the buildings were the shops and the back rooms were the residences. They are similar to old Kyoto buildings, which are often very narrow in front and long front to back, a trick used to reduce taxes, which were based on the width of street access.
The photo also shows the amazing series of roofs, and that’s the main topic of this blog. 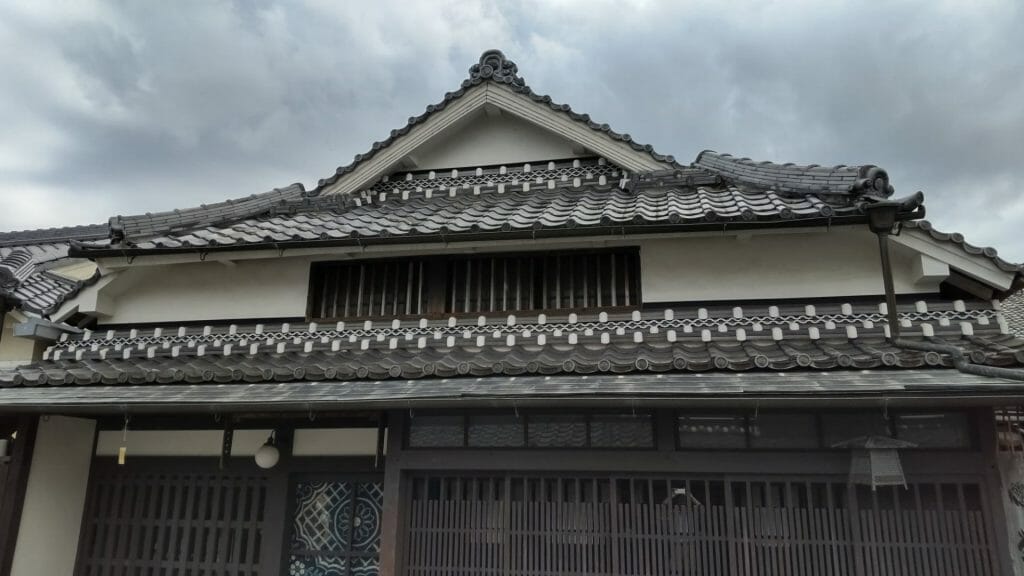 This is one of my favorites. Most of the roof is made of ceramic tiles of various shapes, some more decorative than functional. Traditionally they were set on top of mud to help hold them in place, but the mud is no longer used to make the roofs lighter and thereby more resistant to earthquakes. The little white parts are Shikkui, a type of stucco. It is used to help seal the edges of tiles where they cannot be overlapped, as well as for decoration. The lower awning is made from interlocked sheets of copper, similar to those on my house. 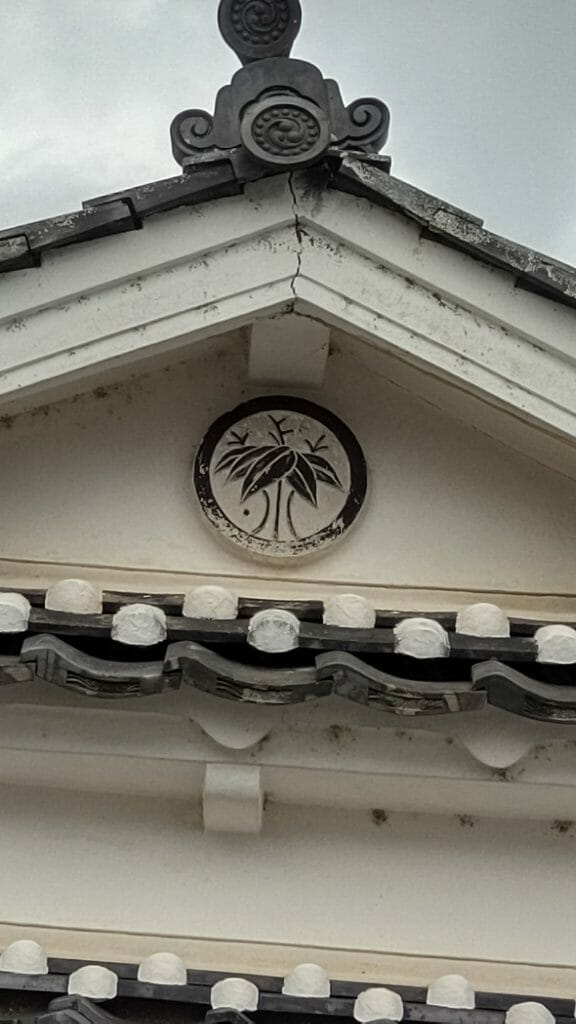 This is one of the few roofs in the area with a decoration in the gable (i.e., the triangular part just below the peak of the roof). I assume it is representation of Sasa bamboo leaves. Most traditional houses in Japan have some sort of decoration in the gable, often the family crest or the character for “water” (to help prevent fires, of course). This varies with the region of Japan, so be sure to check out the local roofs if you travel around Japan. 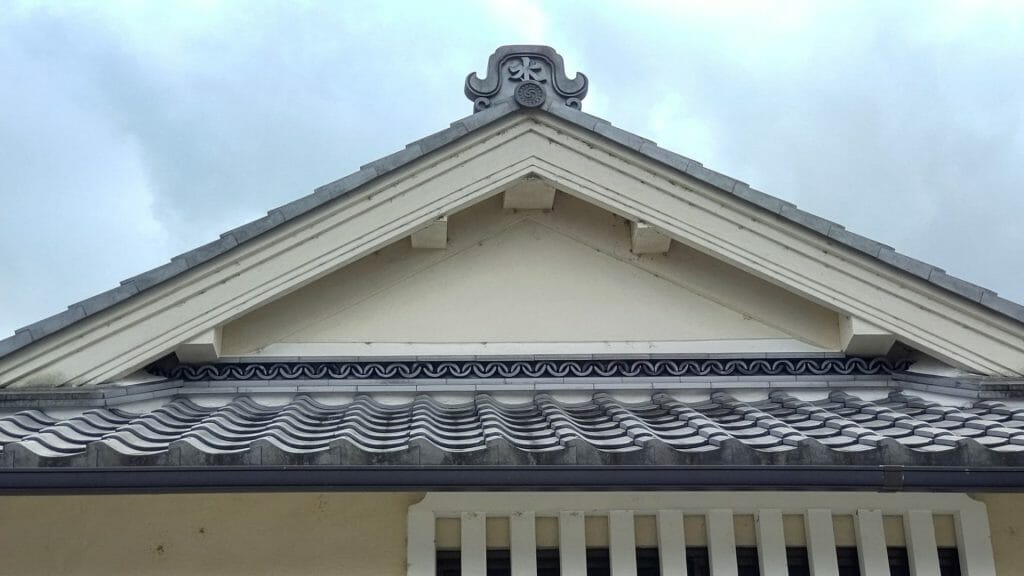 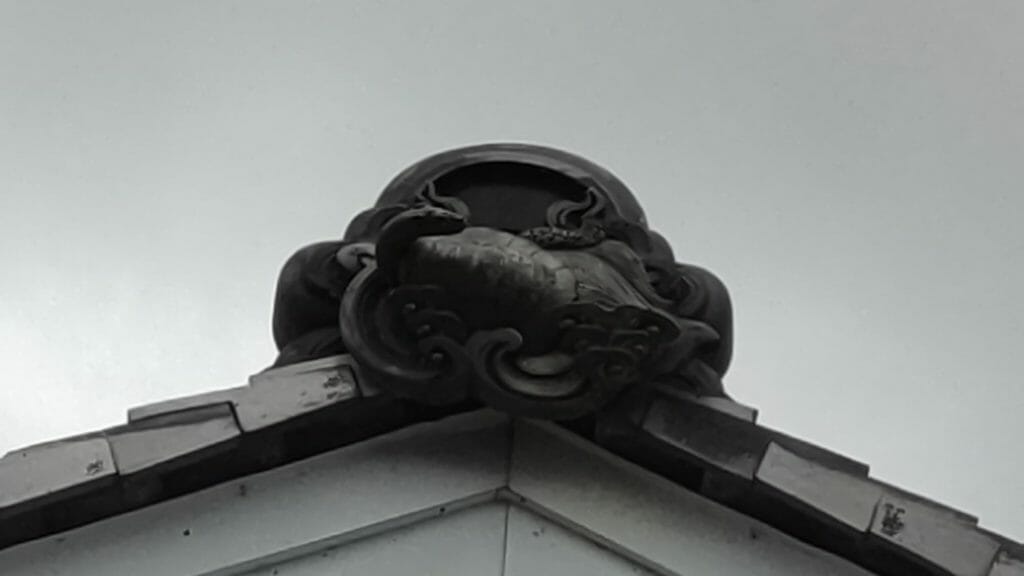 Here, the top decorative tile has the character for “water” (水) instead of the gable. The other photograph shows a more elaborate tile of a mythical turtle, I assume to ward off evil spirits. If you look, you’ll find all sorts of decorative tiles on traditional Japanese roofs. 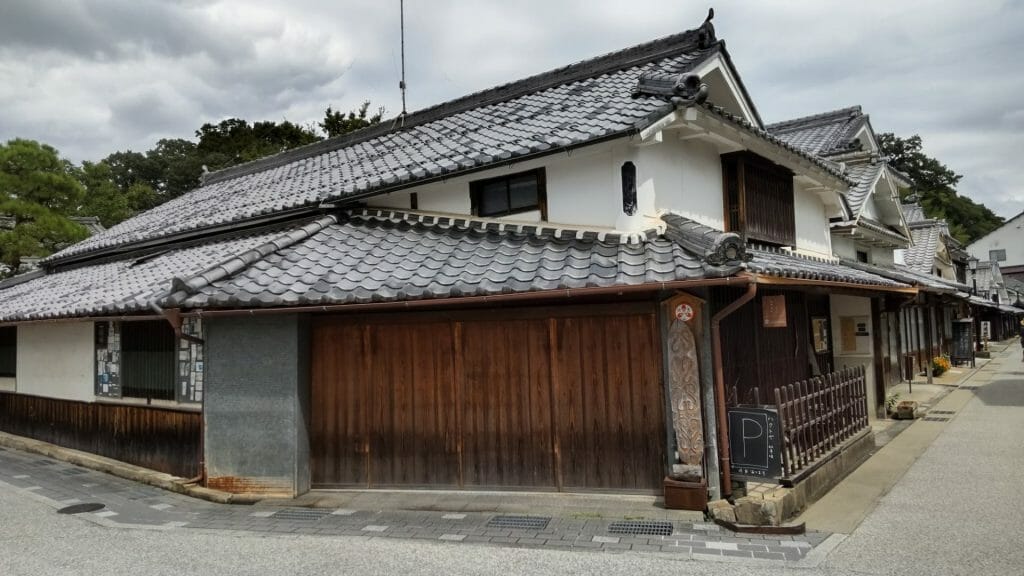 I don’t know the history of the above building, but I expect its complicated roof structure evolved over time into this interesting intersection of various roof planes. 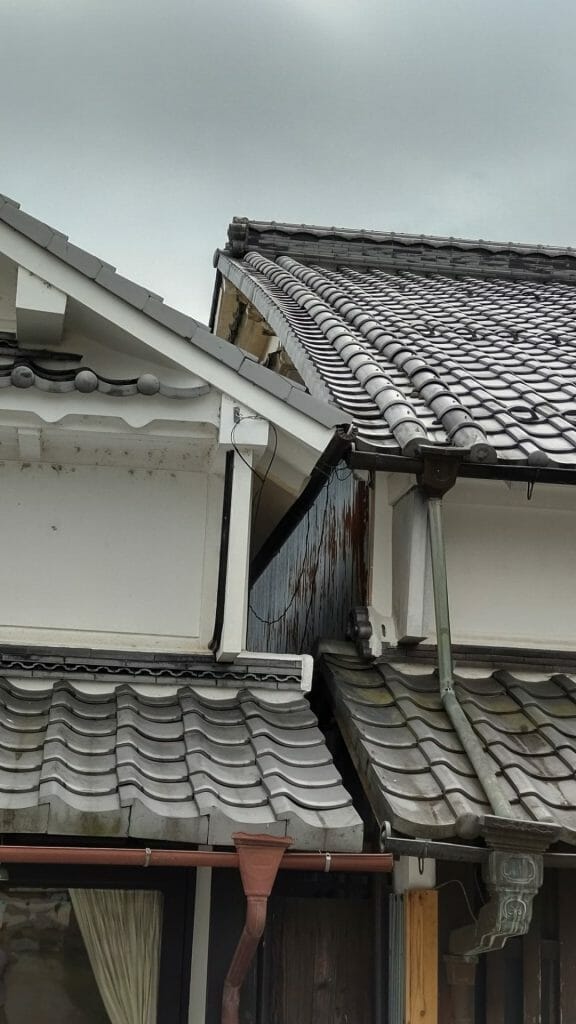 Notice the curvature in the roof on the right. This type of roof is typical of temple buildings, but it is also seen in traditional houses as well. The curve naturally makes the roof much stronger, but also more difficult to make (i.e., more expensive). 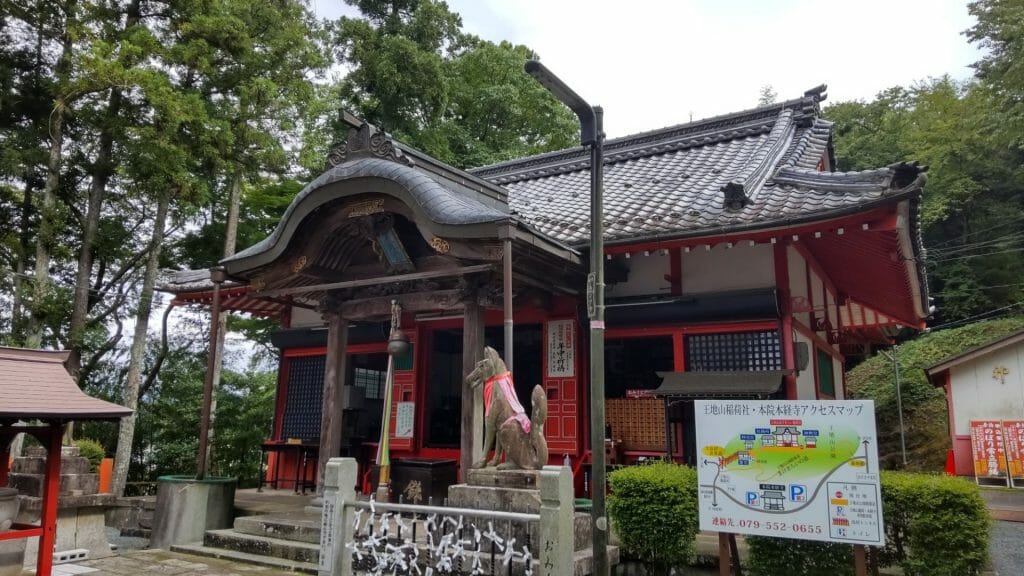 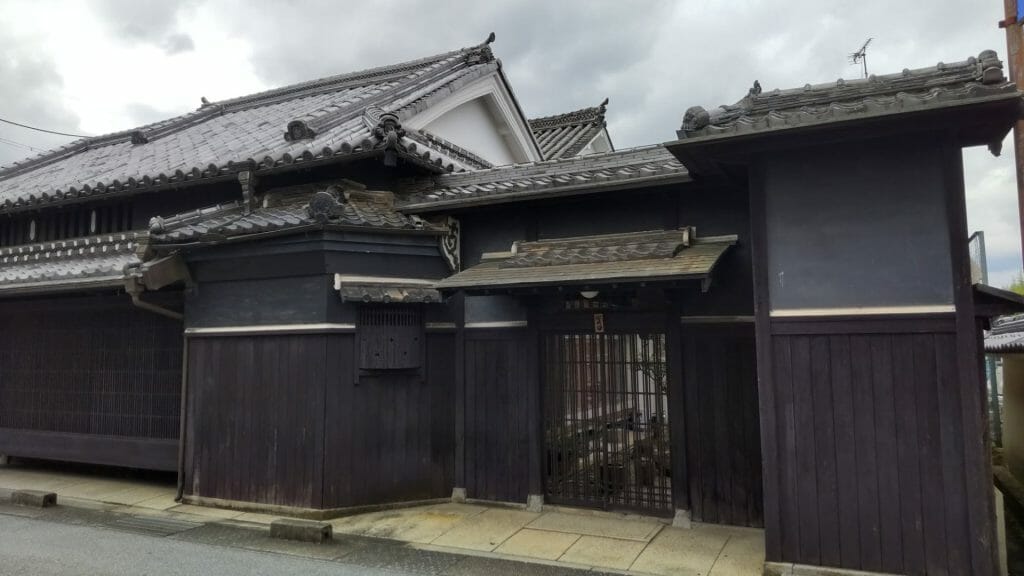 These two photos are of places within easy walking distance of Kawaramachi. The shrine can be found past the Ojiyama Pottery next to the main street. Shrine roofs are also very special, but a topic for another post. The building with the dark walls shows just how complicated roof lines can be in Japan. It lies on the street that connects Kawaramachi to the current main street. It is a private residence, and the inside is just as good as the outside.*

*This building, like many of the building in Kawaramachi, are partly open to the public during the Historic Street Art Festival held in the fall, generally every other year (http://sasayama-art.com/). 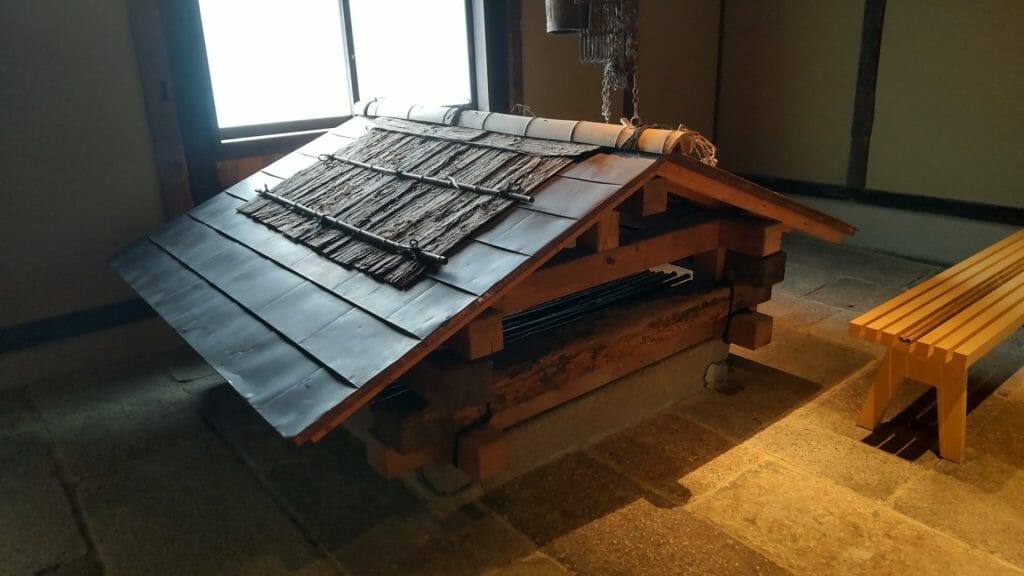 A Roof for a Well

And in Japan, wells often have amazing roofs over them, even when they are inside a building, such as this one at Odakagi, a black soy bean whole seller remodled from the buildings of an old sake brewery (https://www.odagaki.co.jp/store/). Their website is not available in English, but it’s definitely worth the time to stop and see and maybe enjoy a drink in their cafe. 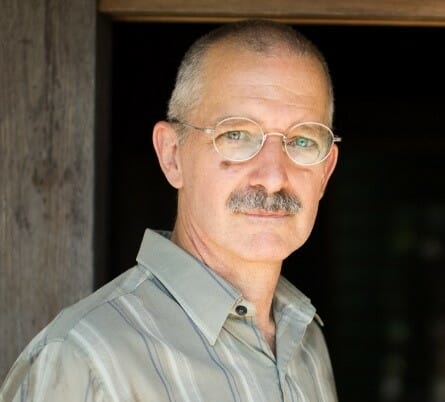 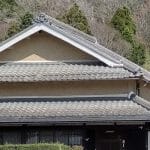 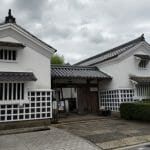 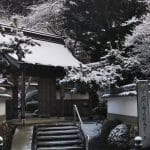 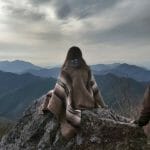 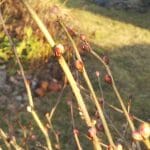 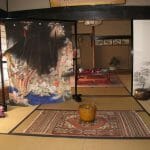 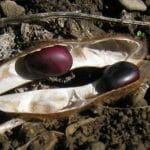 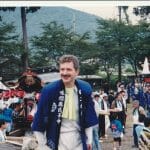 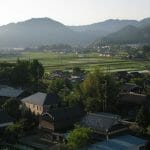